Originally a friend asked me to help them with deciding on final floor arrangements in their new house build as they were finding relating the architects plans and elevations in real a space sense tricky. So, for these purposes a simple card model was made that could be viewed by floor/layers, some of the key points for discussion at the time being the stairs, porch and central atrium, as well as how these spaces were accessed. 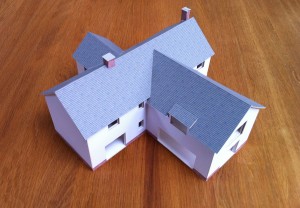 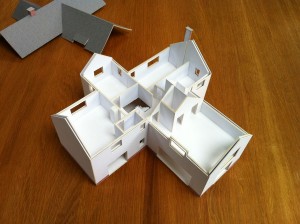 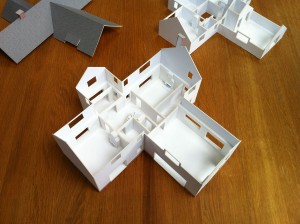 Once a general circulation scheme had been established, final decisions needed to be made in terms of final room dimensions and also final finishes (such as flooring) needed to be addressed. Although the room proportions appeared relatively generous, this can change dramatically once furniture is added, with this in mind the client commissioned me to produce a series of 3D floor plans which were furnished according to each rooms intended use, as well as a couple of renders showing the hall/atrium/skylight and also the patio connection between the kitchen and the living room.

Whilst the floor plan renders had been successful, allowing the client to amend certain (potentially expensive) design issues prior to any construction, potential concern from the locals regarding the size and proximity of the building to the road prompted the commission of some exterior renders to show the building in its finished state.

With construction well under way but the garden still resembling a building site, two final aerial views of the house and the entire property were produced to help the client plan final landscaping ideas and designs (easy when there’s already a digger on site). 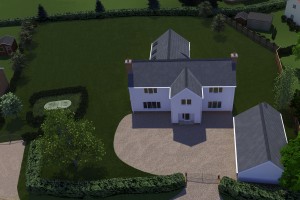 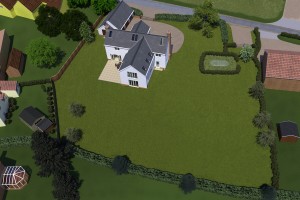 There was only relatively a small budget to play with for this project but still managed to help a couple (without any design background) and their architect to discuss and then make informed design decisions and get the end product(and home) they hoped for.